First the good news: down payments among first-time home buyers are getting slightly bigger.

Now the not-so-good news: that’s not saying much.

In 2009, when the National Association of Realtors started tracking such data in its monthly Realtors Confidence Index, nearly three-quarters of first-timers made down payments of between 0% and 6% of the purchase price. In February, only 65% did.

By that metric, any down payment not in the 0-6% range is bigger, and therefore probably better both for the system and for most individual buyers. But just barely: the median among first-timers in 2016 was 6%, according to separate data NAR tracks. Among all buyers, the median is 10%.

NAR notes that mortgages backed by the government, including the Federal Housing Administration and Fannie Mae and Freddie Mac, have made features like low-down-payment lending more available in order to attract more first-time buyers into the market. 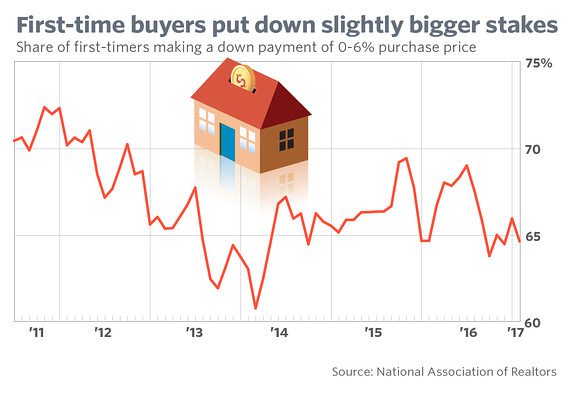 But those efforts have been “modest,” NAR noted, in part because most would-be buyers aren’t aware they exist.

What’s more, they wrote, “some buyers may want to save for a bigger down payment to meet underwriting standards (e.g., debt-to-income ratios, loan-to-value ratios), save on mortgage insurance, or get a lower interest rate.”

There are different ways to think about down payments being lower now than in the past. Many analysts believe mortgage lending is so tight that it’s too restrictive – meaning that anyone who qualifies poses almost no credit risk.

And while the current crop of buyers may have managed their credit impeccably in the past, it’s not clear how that history will translate when the economy turns down — and how those who’ve recently bought property at high prices with little skin in the game will handle it.

By Andrea Riquier at realtor.com